Member Login
View cart “Case Studies on Pattern Identification -eBook” has been added to your cart.

The Banner for a Chinese Lady Going to Paradise is a most unusual
ebook. At first glance, it appears to be a painstakingly detailed description
of a single artifact created in the Southern Chinese kingdom of Chu at the
beginning of the 2nd century BCE—the exquisitely preserved funeral
banner of the Marchioness of Dai, discovered in 1972 at the famous
archeological site Mawangdui in today’s Hunan Province. As the analysis
unfolds, however, it becomes clear that the distinguished authors use the
banner as a gateway to the cosmological backdrop of the classical period
of Chinese thought as formulated during the Warring States Period (481-
221 BCE) and the subsequent dynasties of the Qin (221-207 BCE) and
Western Han (206 BCE – 9 CE). As such, this seemingly esoteric text
becomes relevant not only for lovers of ancient China and traditional
funeral rituals, but for anyone who still utilizes the symbol science of early
China to make sense of our world today.

This group first and foremost includes students and practitioners of
Chinese medicine, who continue to utilize archetypal concepts like the
inextricable connection between body, mind, and spirit; the trinity of
Heaven, Earth and Humanity; yin and yang; the five phase elements; and
other symbolic markers that have found their classical definition and artistic
expression on the banner. This may explain why the authors, Elizabeth
Rochat de la Vallée and the late Father Claude Larre chose to
comprehensively cover such a particular topic in the French edition of this
book that was originally published in 1995. The prolific writer and translator
team, after all, is best known for their insightful introductions to the medical
theories laid out in the Huangdi neijing (The Yellow Emperor’s Classic of
Medicine) and other foundational texts of classical Chinese medicine.

Lady Dai died in 169 BCE and was interned in an elaborate mausoleum
next to the tomb of her husband, the Commanding Governor of the vassal
kingdom of Changsha in the Southern region of Chu. While the grave of her
husband had been looted, hers remained fully intact and the sarcophagus
and accompanying artifacts appeared perfectly preserved. The grave site,
hence known as Mawangdui, contains not only more than 1,000 artifacts
that give us unique and direct insight into the civilization of the Han
dynasty, but also provide scholars of Chinese history with the earliest
versions of many of the seminal texts of Chinese literature, such as the
Yijing (Classic of Change), the Daodejing and early primers of Chinese
medicine—together known as the Mawangdui Silk Texts.

The body and burial vault of the Marchioness are considered one of the
most important archaeological discoveries of the 20th century. In her tomb,
four coffins of decreasing sizes envelop one another. The silk banner that is
the main subject of this book was found draped over the innermost coffin.
About two meters long and exquisitely preserved, it is a one-of-a-kind
painted canvas that vividly depicts the cosmology and symbolism of the
formative period of classical Chinese thought. Commissioned by nobles of
the Han empire from a master artisan in the southern Kingdom of Chu, it is
a funeral banner intended to guide the soul on its ascension to Heaven.
Similar to a map for travelers in the realm of the living, it symbolically
represents the world after death in its diverse aspects.

The banner features elaborate images of shamans, the sun and the moon,
dragons, phoenixes, the toad and the hare, cranes, owls, leopards, turtles,
Mt. Kunlun, the Isles of Paradise, and other icons typical for Han dynasty
cosmology and the formative period of Chinese medicine. The intrinsic
value of this publication, however, is the detailed fashion in which the
authors decipher each of the banner’s phenomena by taking the reader on
a journey through the classical literature of the time: the Classic of Change
(Yijing), the Book of Rites (Liji), the Songs of Chu (Chuci), the Classic of
Mountains and Seas (Shanhaijing), the Daodejing, the Zhuangzi, Master
Lü’s Spring and Autumn Annals (Lüshi chunqiu), The Commentary of Zuo
(Zuozhuan), and the Huainanzi. These are the seminal works that define
the underlying concepts of holistic Chinese system science and its practical
applications, including the foundational concepts and the terminology of
Chinese medicine.

This is, in my opinion, the main reason to celebrate the authors of this book
and their consistent choice of topics: the unrelenting message for modern
Chinese medicine practitioners that their craft, on the deepest level, is a
way of thinking rather than a bag of technological tricks; a commitment to
life-long learning and the observation of nature as practiced by ancient
observers of the cosmos and their timeless ancestral wisdom. The Banner
for a Chinese Lady Going to Paradise, therefore, is capable of inspiring
readers of all backgrounds, similar to other exquisite excursions into
ancient cosmology and human enlightenment such as Susan Brind
Morrow’s naturalist presentation of the Egyptian Pyramid Texts, The
Dawning Moon of the Mind. For my part, I look forward to future
publications by Elizabeth Rochat de la Vallée! 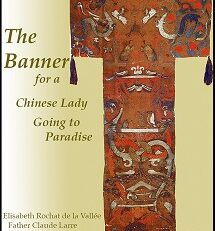