The Book of Five Rings

Here is one of the most insightful texts on the subtle arts of confrontation and victory to emerge from Asian culture. Written not only for martial artists but for leaders in all professions, the book analyzes the process of struggle and mastery over conflict that underlies every level of human interaction.

The Book of Five Rings – which has become a well-known classic among American business people, studied for its insights into the Japanese approach to business strategy – was composed in 1643 by the famed duelist and undefeated samurai Miyamoto Musashi. Unlike previous editions of The Book of Five Rings, Thomas Cleary’s is an accessible translation, free of jargon, with an introduction that presents the spiritual background of the warrior tradition. Along with Musashi’s text, Cleary translates another important Japanese classic on leadership and strategy: The Book of Family Traditions on the Art of War by Yagyu Munenori, which highlights the ethical and spiritual insights of Taoism and Zen as they apply to the way of the warrior.

Thomas Cleary holds a Ph.D. in East Asian Languages and Civilizations from Harvard University. He is the translator of over fifty volumes of Buddhist, Taoist, Confucian, and Islamic texts from Sanskrit, Chinese, Japanese, Pali, and Arabic – including the best-selling Art of War.

Praise for The Book of Five Rings

“Musashi’s teachings read like lessons from the latest business management gurus. Who couldn’t succeed in business by applying Musashi’s insights on conflict and strategy?” 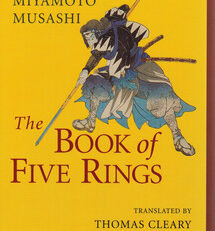