A Translation and Discussion of Qí Zhòngfǔ’s Hundred Questions on Gynecology. Part One ~ Questions 1-14

This book offers a literal translation of Questions 1-14 in Qí Zhòngfǔ’s 齊仲甫 Nǚ Kē Bǎi Wèn 《女科百問》 (“Hundred Questions on Gynecology,” published in 1220 CE) on the theoretical foundations and menstrual conditions, with the Chinese text side-by-side with the English translation. It also includes a detailed historical introduction on the early history of gynecology in China, extensive commentaries by Sabine Wilms on the essays and formulas, a preface and clinical notes by Sharon Weizenbaum, medicinal and formula tables, and beautiful photos of the author’s home on Whidbey Island.

In the heyday of classical Chinese gynecology roughly eight centuries ago, Qí Zhòngfǔ 齊仲甫 composed a humbly named masterpiece, to address his students’, colleagues’, and patients’ “Hundred Questions on Gynecology” (女科百問). Quoting and discussing all the major theories and treatments found in earlier gynecological texts, the Chinese original of this book must have been as useful to his Sòng dynasty readers as this modern English translation will be for any practitioner of Chinese gynecology today.

One of the eminent translators of Chinese medical literature, Dr. Sabine Wilms has once again crafted a meticulously researched, lovingly phrased, and abundantly annotated translation in an attractive and accessible edition that is sure to inspire our clinical colleagues and set a new bar for the clinical practice of traditional Chinese gynecology in the West. This volume is the first in a series of four volumes and covers Questions 1-14.

Be the first to review “Channeling the Moon” Cancel reply 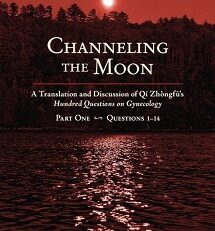 You're viewing: Channeling the Moon $58.00
Add to cart