This book has an interesting history which is described in the introduction by Paul Zmiewski. It also has an interesting publishing history. We first learned of Soluie De Morant’s work in the late 1960’s from macrobiotic teachers who, based upon his book with Yukikazu Sakurazawa (George Oshawa), believed that De Morant had learned acupuncture from Oshawa in France. Among those interested in acupuncture in the early 1970s, this discouraged further research because people were looking for technical instruction and assumed that Soulie de Morant’s Chinese Acupuncture would thus be like Oshawa’s writings. Although this rumor was clearly untrue, it contributed to an important trend in the early transmission of acupuncture by directing attention to other French writers, for example, Chamfrault. Ironically, because George Soulie De Morant learned acupuncture through twenty years of research and practice in China, his work was actually more easily applied in practice.

However, by 1975, when copies of L’Acuponcture Chinoise became available through Quebec, it became a primary source, not only for the theory of acupuncture energetics but also for acupoint locations and indications. In particular, his fifth book, “Treatments,” was invaluable because it was arranged much like a homeopathic repetory and could be easilly accessed. However, its influence did not spread beyond Europe and the Eastern U.S.

In 1981 Paul Zmeiwski found a GSDM translation at the Sri Aurobindo Ashram in Pondicherry India. We immediately decided to pursue it. The translators, Lawrance (Dhruva) Grinnell, Claudy Jeanmougin, and Maurice Leveque were a French-American team who had translated the text from respect for it. It was their primary source for clinical practice at the Ashram. It was rumored that a British academic publisher had attempted the publication and failed, but we were not then dissuaded because we believed that their problem must have been the lack of Chinese references. Without a Chinese language glossary the scope of Soulie De Morant’s work was so great that it would be impossible to insure the transmission did not become garbled. However, we were already working with Wiseman’s original lists, and GSDM was rigorous about keeping links to the Chinese, so we were sure we could overcome this problem.

By 1984 when we were finally able to negotiate a contract with the French publisher, almost a decade had passed, but Soulie De Morant’s work was still almost unkown in the U.S. However, T.C.M. had begun to dominate the American market. This changed the character of the project because it was now unlikely, if not impossible, for L’Acuponcture Chinoise to find the endorsements it would need to successfully compete with T.C.M. For example, during most of the early 1980’s there were strong opinions expressed about “five elements” as an oppostion to T.C.M. Arguments about symtomatic versus root acupuncture were hotly contested and the acupuncture Soulie De Morant reported fit neither of these ideas.

Furthermore, we had realized that were it true that a large university press had abandoned the project, it was probably a purely economic decision. The translation had been typed into a first generation disk-based typesetting machine. That left no inexpensive option. We could typeset it as is, without translators’ changes or conventional editing. This, of course, is what the machine’s owners had in mind.

When we refused, we were told we could have no further copies of the manuscript. Unless the machine’s owners were guaranteed the typeset, and prepaid, we would need to start from scratch.

The book almost languished in a drawer beneath the mailing desk. Fortunately, “George,” as the book was know to those of us working on it, is so fascinating that everyone kept working despite the lack of any particular commercial plan. Mary Kinneavy, then an acupuncturist, now a teacher at the New England School of Acupuncture, retyped the entire MSS while answering phones at Redwing Books. Trained in Japanese acupuncture, Mary found it fascinating. Diane Putt, did most of the consistency checking, text and index programming, when her then state-of-the-art 80286 UNIX machine was free of invoicing and statementing. Paul and I re-translated and did editorial chores. Martha Fielding and Dhruva Grinnel edited and proofed, Paul spent three weeks in Paris where George’s heirs kindly gave him access to the orignial note cards GSDM used to prepare the book. Gail Neubert revised the punctuation, and Sally Rimkeit and Missa Olatunji, acupuncturists and teachers in New Zealand, also edited most of the first three volumes. Other readers worked on the project but their input arrived too late to use because we had crossed our contractual publication deadline.

Clearly, Chinese Acupuncture has never acheived the recognition it might have accomplished had it been in print in the early 80s’. Regardless, George Soulie De Morant’s work is one of the seminal events of acupuncture’s westward transmission and remains a significant reference for experienced clinicians.

“The most recent translation of George Soulie de Morant’s Chinese Acupuncture into the English language is a monumental effort…both a clinical text and a philosophical discourse and as such has much to offer the practitioner and the academic.”

“A classic in its own right.”

“This scholarly work, though daunting in its size and detail…is a must-read for all dedicated students and practitioners of acupuncture.” 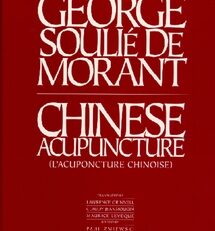