Member Login
View cart “The Channel Divergences: Deeper Pathways of the Web -eBook” has been added to your cart.

Chinese Grammar for Life is a systematic grammar of Taiwan Mandarin, richly illustrated with examples from the real-life conversation. It provides an integrated picture of Chinese grammar that is somewhat lacking in the ad-hoc sentence-pattern approach adopted by many textbooks and by programs, while at the same time providing example sentences in Chinese with Pīnyīn transliteration and English translations to enable readers to communicate in the real world of 21st century Chinese life in Taiwan.

Chinese grammar in many ways is vastly simpler than that of any European language. It no no variations in word form, no complex conjugations, declensions or other inflections that must be painstakingly memorized before one can start to read texts or engage in conversation. It expresses grammatical relationships almost exclusively through syntax (word-order), which is mastered by studying sentence patterns and by gradual osmosis. Despite the apparent simplicity of Chinese, Western students often find its grammatical constructions quite alien and often fail to fully understand them through the often piecemeal presentation of basic patterns. Our approach is to provide a more integrated picture by relating patterns to the underlying features of the language from which its logic derives. We discuss principles rarely discussed in textbooks, such as the definiteness of subjects, double subjects, the varying nature of objects, and the formation of compounds between different functional elements of a sentence.

Most grammar books intended for the student of a foreign language present minimum vocabulary order to make the grammar more accessible to beginners. A disadvantage of this is that the grammar book loses its attraction to more advanced students. Grammar, in the widest sense, includes the formation of words. In Chinese, where the distinction between word, morpheme, and phrase is blurred, word formation requires greater attention than in Indo-European languages. For these reasons, we have made a wide and useful vocabulary that comprehensively embodies word formation patterns a feature of this text. In particular, we have included comprehensive lists of classifiers, separable VO compounds, and commonly used adverbials.

Unit 1, intended for any student who has mastered the construction of the Chinese script and some basic characters, firstly introduces the salient features of the language, such as Chinese as an isolating, subject-verb-object, and monosyllabic language, as well as many other characteristics that help students to understand the underlying logic of the language. It then follows with a brief overview of Chinese grammar according to word classes (parts of speech) and larger functional units (nominals, verbs, adjectives, adverbials, conjunctions) and grammatical constructions such as negative and interrogative sentences.

The remaining units (2–10) each focus on a particular part of speech or element of grammar and how it is integrated into sentences. We pay attention to the word-building patterns of the language, as well as the grammatical structures. We include discussions on the diachronic aspects of the language, which are particularly important in Chinese, on how Chinese is similar to and differs from English and other European languages, and on how Taiwan Mandarin differs from Pǔtōnghuà. We place great emphasis on the use of work-horse words such as 就 jiù, 才 cái, 於 yú, 如 rú, 給 gěi, which perform important grammatical functions.

Grammatical theory is exemplified through thousands of example sentences that richly reflect the patterns of everyday Chinese communication and cover numerous communicative situations. Students who prize practicality of expression over theoretical explanation will find the example sentences almost sufficient in themselves to gain mastery of Chinese grammar along with heaps of vocabulary that they are unlikely to get in the classroom.

Nigel Wiseman, born in the UK, studied Spanish and German at Heriot-Watt University in Edinburgh and subsequently worked as a French-English translator in German in Belgium while learning Chinese. In 1981, he moved to Taiwan, where he has lived ever since. He holds a doctorate in Complementary Health from the University of Exeter.

Nigel has taught English and subjects related to Chinese medicine at China Medical University and Chang Gung University in Taiwan.

Specializing in English translation of Chinese medical texts, Nigel has produced numerous titles in collaboration with other translators. He is widely known in the international community for his research on Chinese medical terminology. He has written several language books for people learning Chinese medical Chinese.

Chao Chia-Lin (趙家麟), a native of Taiwan, studied psychology at Fuxinggang College, and holds a Masters degree in military logistics. He is currently studying for a Master’s degree in translation at Fujen Catholic University, New Taipei City, and works as a professional translator. 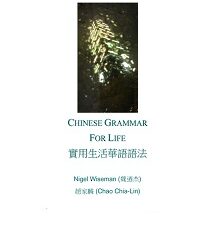 You're viewing: Chinese Grammar for Life -eBook $49.95
Add to cart