This text is a practical guide to the tools, skills, and techniques common to all acupuncture practice with an emphasis on those that are uniquely or creatively Japanese. It is clear, direct, and completely illustrated with high resolution close-up photography. The instructions are simple and concise so they may be easily applied to the practice of any acupuncture tradition.

Beginning with traditional needling techniques, the text covers filiform needling, supplementation and drainage, needle with moxa – all with several approaches. Moxibustion is covered to an equally great extent and detail, as are instruments, intradermal needles, press tack needles and spheres.

In addition to highly specialized Japanese techniques such as shonishinpo (treatment techniques for children) and the Manaka wooden hammer and needle technique, therapies like cupping that are used throughout Asia are described in full detail. This book is more than just a fine collection of practical instruction. The introduction provides context through a brief but very accessible tour of modern Japanese training and practice that includes a highly useful guide to root treatment. Each of the techniques is also made more valuable by the description of treatment protocols with proven histories of successful clinical application.

“We have produced a book to represents a new level of development and maturity in the field of acupuncture in the West. Most books in English reiterate the same basic materials over and over again, with a heavy emphasis on theory. It is only recently that the field (in the English language) has matured sufficiently to develop the teaching tools for the next stage of development: technical refinements and clinical detail. This book is a compilation of extremely useful common and not so common methods used in Japan. We thoroughly searched the modern literature from Japan and its specialized techniques to compile detailed descriptions of techniques used by well-known practitioners in Japan and refined the presentation through our own experience learning with Japanese teachers. We feel the photography in the text makes the methods come alive, ensuring accessibility and precision. The introductory sections give an overview of the history, nature and development of acupuncture in Japan, and how the materials in the book dovetail with techniques and methods described in other texts on Japanese acupuncture (notably the work of Manaka and meridian therapy).

The chapter on needling is perhaps the largest ever compiled in English. It covers detailed uses of the nine needles of the Ling Shu uses of the needle and tube in a variety of methods, and the moxa on the handle of the needle technique. The next chapter details the use of moxibustion, which is a highly specialized practice in Japan. The next three chapters describe the use of intradermal needles, press-tack needles and press-spheres. The following two chapters describe highly specialized uses of cupping and bloodletting. The use of Manaka’s wooden hammer and needle (helpful both in the clinic and for home therapy) is then described. The final chapter describes a number of cases compiled from the Japanese literature and the clinical cases of the authors. Each chapter contains a repetoir of established therapeutic applications for the techniques described.

The depth of clinical detail in this text will allow readers to use the book as a reference while learning to use and refine these methods.”

During the latter part of the Six Dynasties period, Chinese traditional medicines were exported to neighboring East Asian countries. Buddhist monks brought Chinese traditional medicines to both Korea and Japan. By some estimates the systems of pharmaceutics, acupuncture and moxibustion were first sent to Paekche, Korea by the emperor Wu Di in around 515. For example, Huang-fu Mi’s influential text, The Systematic Classic, is known to have been among them.

By 682, contact between Japan and China was curtailed. Japanese traditional medicine then developed distinctive features, and some of what people call “Japanese Acupuncture” today are among them. For example, moxibustion and acupuncture were separate practices in the Chinese texts of the transmission era and this was retained in Japan. In China there was a different evolution. However, like acupuncture everywhere, twentieth century events have had profound effects on acupuncture in Japan.

The seminal event for modern Japanese acupuncture is probably a post-war rally by blind acupuncturists protesting Douglas MacArthur’s edict against traditional medicine. In Japan, acupuncture was a traditional employment for the blind and their Tokyo rally against its prohibition is credited with acupuncture’s modern survival. There were also other influences on the technical qualities of acupuncture in Japan, but the predominance of blind practitioners in the immediate post-war period certainly emphasized palpation — particularly of the pulse and abdomen — and this emphasis was retained in the keriaku chirio (channel based) approaches even as the blind became less and less a percentage of Japanese practitioners.

Keep in mind though that there are Chinese practitioners who use abdominal diagnosis, light stimulation and techniques generally though of as ethnically Japanese, just as T.C.M. acupuncture is readily-available in Japan. Yoshio Manaka’s work achieved prominence China just as it did in Japan. So, the issue of acupuncture styles is really much larger than can be expressed by saying that it is “Japanese” or “Chinese.” Although this book concentrates on technique developed in Japan, or prominent in Japanese practice, may of these are used world-wide. Japanese needles and Japanese insertion tube techniques are used virtually everywhere, and, for example, the one-hand insertion technique this book teaches is clinically useful for what ever reason you may need a hand free.

Japanese shoni shin – the use of specialized instruments to give light, painless stimulation at the body’s surface is Japanese pediatric acupuncture in origin. Nonetheless, it is useful in any theoretical frame work and with any patient for whom highly-controlled stimulus doses is required. The same is true of cupping, moxibustion and many of the techniques explained in this text.

Be the first to review “Japanese Acupuncture: A Clinical Guide” Cancel reply 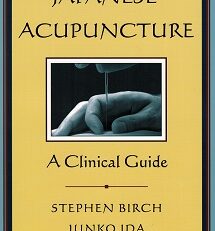 You're viewing: Japanese Acupuncture: A Clinical Guide $59.95
Add to cart