It was not”invented” in a vacuum, but developed through thousands of years of study, research, and Direct Experience by great minds in many arenas of endeavor.

There is another aspect to the art that is not always presented, or even acknowledged. That aspect is Alchemy,

“Inner Alchemy is defined as the transformation of “base” to “refined’; taking the ordinary and materially bound consciousness through a step by step journey to Universal Presence:’ (HUA SHAN CHI KUNG LEVEL 1 back cover)

TAI CHI CHUAN ALCHEMY explores the deeper energetic structures of Tai Chi Chuan, notably the Five Elements and the Eight Trigrams. These Thirteen Original Postures provide the energetic matrix through which the Tai Chi Chuan practitioner expresses himself into the world and also through which he can approach Universal Consciousness. 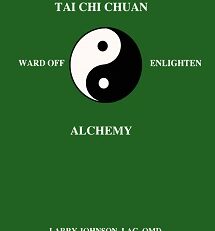