In this second volume, Jean-Pierre Barral further develops the concepts and techniques first described in his pioneering work Visceral Manipulation.

The introductory chapter focuses on lesional chains and reflexogenic zones. There is an in-depth discussion of such diagnostic methods as general and local listening, inhibition points, and the completed form of the Adson-Wright and Lasegue tests.

The treatment section introduces recoil and general induction, and discusses treatment strategy and some special problems associated with manipulation in children. The autonomic plexuses of the trunk and their place in visceral manipulation are also described.

Other chapters discuss such structures as the peritoneum, spleen and pancreas which were not covered in the first volume. There is also an expanded discussion of the gastroesophageal junction, stomach and duodenum, liver, gallbladder and bile ducts, jejunoileum and colon, and kidneys.

Extensively illustrated and fully indexed, Visceral Manipulation II is an important book for all practitioners who wish to improve their skills in visceral manipulation.

Jean-Pierre Barral, D.O. (U.K.) is a graduate of the European School of Osteopathy in Maidstone, England. A well-known clinician and teacher in his native France and throughout Europe, he has authored and contributed to many osteopathic textbooks. His works in English include Visceral Manipulation (with Pierre Mercier, D.O.), Visceral Manipulation II, The Thorax, Urogenital Manipulation, Manual Thermal Diagnosis and most recently, An Osteopathic Approach To Trauma.

Dr. Barral is presently Academic Director of the International College of Osteopathy in Saint Etienne, France. He is also Chairman of the Department of Visceral Manipulation on the Faculty of Medicine at Paris du Nord. He has taught widely throughout Europe, the United States and Japan, and practices osteopathy in Grenoble, France.

“It is such a relief to finally find works on alternative approaches to medicine written by and for scientifically oriented minds. The language is beautiful, clear and to the point.”

Be the first to review “Visceral Manipulation II” Cancel reply 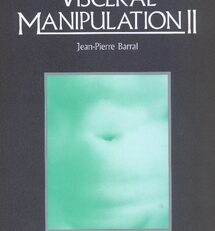