Cultivating Ch’i: A Samurai Physician’s Teachings on the Way of Health

Born in 1630 to a samurai family during the lifetime of renowned swordsman Miyamoto Musashi, Kaibara Ekiken (1630–1714) was a samurai physician and neo-Confucian scholar who became known for his intellect and wide interests, which encompassed a myriad of subjects, including Confucianism, Buddhism, education, history, herbal remedies, spiritual issues, and philosophy. But earlier in his career, he fell into disfavor with his lord and was stripped of his income and forced to become a ronin (a wandering, unemployed samurai). After being reinstated by the new daimyo lord of the Fukuoka region, he began an intense period of study in Kyoto, where he interacted with some of the luminaries of the time. Kaibara was author of a number of published books, one of his last being the Yojokun, released when he was 84.

Ekiken’s basic premise is simple: at birth, we are all given, with rare exception, a body meant to last 100 years. How we take care of it mentally, spiritually, and physically determines whether we will live out our life to the fullest, and enjoy it to the limit. The key lies in moderation, controlling our desires, appreciating the right things, and regulating the life force within. With copious notes based on the Chinese classics, his medical practice, extensive travel, and life all around him, the samurai doctor slowly unveils his Way of Nurturing Life, a method surprisingly intuitive and remarkably appropriate even today, nearly 300 years after it was first written.

Be the first to review “Cultivating Ch’i: A Samurai Physician’s Teachings on the Way of Health” Cancel reply 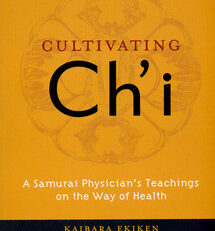 You're viewing: Cultivating Ch’i: A Samurai Physician’s Teachings on the Way of Health $16.95
Add to cart