Atlas of Shiatsu: The Meridians of Zen Shiatsu

This book shows the courses of the meridians as they were described by Sensei Shizuto Masunaga in his meridian charts originally published in 1970. The sequence of descriptions (e.g., from the shoulder to the hands, from the Hara to the feet), models the flowing of the meridian energy from the body’s center (Hara) towards the periphery. Meridians on the side and back of the body that do not pass through the Hara are not featured. Depictions of the meridian pathways usually consist of two parts. In the main text are the actual pathway descriptions. The color-contrasting text sections note such information as anatomical explanations, practical orientation, and typical deviations in the pathways. Differences from the depictions on Masunaga’s charts are mentioned and described. The representations of the meridian pathways make up the core of this Atlas, and an additional chapter delves into the nature of the phenomenon of meridians. Another chapter describes some basic principles of working with meridians.

The introductory chapter combines clear descriptions and objective guidelines with a compassionate and refined interpretation of the subjective experience. Shiatsu students will benefit immensely from the detailed illustrations of the Zen Shiatsu meridians. They may also wisely bring to mind the perspective of spaciousness so well articulated by the authors.

Carola Beresford-Cooke comments: “As practitioners, we will recall that our own qi is an equal participant in the connection with our receiving client-partner, and our own experience of contact with the meridian—vital, rich, imaginative, profound—is an essential element of the process of healing.”

Praise for Atlas of Shiatsu: The Meridians of Zen Shiatsu

“Atlas of Shiatsu is a magnificently researched and illustrated tribute to the Meridians of Zen Shiatsu, neo Masunaga. Translated beautifully from the original German, the Atlas is the work of two of Europe’s best known Shiatsu teachers – Wilfried Rappenecker and Meike Kockrick, of the School for Shiatsu founded by Rappenecker in Hamburg. Rappenecker is also an MD and an L.Ac and brings all three levels of expertise to this unique work.

The Atlas reflects Rappenecker and Kokrick’s discussions over two decades of treating and teaching the Zen Shiatsu meridians. It reflects their experiential quest to adapt Masunaga’s basic grid into a more fluid system. The book is a must for any teacher or student who welcomes fresh interpretations beyond Masunaga. The work achieves the paradox of explicitly detailed and clear line drawings and photographs for teaching purposes, while acknowledging the fact that, as the authors say, “Meridians are only experienced subjectively.”

When I interviewed Meike Kockrick in Hamburg recently, she said, “In developing this book, we wanted what we feel when we treat a meridian to be the same as when we look at the illustrations.” The Atlas also documents and discusses the overlaps and differences between traditional and Zen Shiatsu meridians, honoring both in close-up photos and detailed anatomical illustrations with major point locations. A student can learn segment by segment (shoulder or arm, wrist, and hand for example) instead of feeling overwhelmed by meridian charts dotted with hundred of points.

The Atlas is enriched by useful tips from the authors’ observations. For example, “Disorders of the lateral aspect of the knee joint, especially of the lateral meniscus, can be interpreted primarily as stagnant Gall Bladder energy.” The texts are user friendly and creative, while offering sympathetic tips to those who find meridian location a challenge. Another example is on page 57, “Many students find it difficult to treat Spleen/Pancreas on the thigh, as it is not so easy to find a position that allows the practitioner to work from a relaxed Hara and at the same time sink into the meridian perpendicularly to the surface of the body.” Ah yes ! Which is why, to end on a personal note, I have always taught the Zen Shiatsu meridians through stretch positions and movement. As the authors note, Masunaga himself never really documented the meridians in a multidimensional way. The Atlas of Shiatsu does just that.”

Be the first to review “Atlas of Shiatsu: The Meridians of Zen Shiatsu” Cancel reply 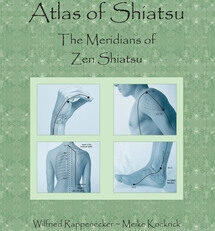 You're viewing: Atlas of Shiatsu: The Meridians of Zen Shiatsu $62.95
Add to cart