This convenient, spiral-bound, version of the Auriculotherapy Manual: Chinese and Western Systems of Ear Acupuncture, Second Edition, is one of the most comprehensive and clinically useful in the field of auricular acupuncture. It is written in a manner that is both academically insightful and yet very user friendly. The manual begins with a review of the history of auricular acupuncture, a comparison to body acupuncture, and a delineation of the different theories that underlie the neurophysiological and energetic mechanisms of auriculotherapy. The detailed descriptions and visual images of auricular anatomy allow for a basic foundation to formulate the correspondence between areas of the external ear that represent specific areas of the physical body. The identification of designated auricular landmarks facilitates a better understanding of the location and topography of distinct regions of the auricle which represent specific regions of the body. A full nomenclature system provides an organized format for the verbal presentation of anatomical areas of the body that are represented on the external ear. Master auricular points, musculoskeletal areas of the body, internal organs, endocrine glands, and the central nervous system are identified by both verbal articulation and detailed, pictorial images. Over 200 ear points are presented, which includes European based auricular points first described by Paul Nogier of Lyon, France and Chinese based ear acupuncture points which were used both in ancient times and in the current practice of Oriental medicine in Asia. A final section outlines clinical protocols that delineate which ear points are frequently used in the treatment of individual health disorders. The clear and well-labeled illustrations have made this text one of the most widely used sources for learning the practice of auriculotherapy. 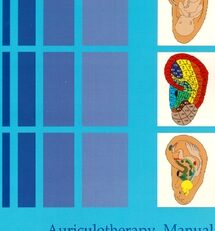