Cheng Man Ch’ing is well-known for codifying the most popular form of T’ai Chi – Yang style – by simplifying and abbreviating the movements of his master, Yang Chengfu. Professor Cheng’s Thirteen Treatises on T’ai Chi Ch’uan, written in 1947, remains one of the most important theoretical texts on T’ai Chi.

In this scholarly yet practical book, Professor Cheng shares the secrets of his lineage and takes the reader to the heart of T’ai Chi Ch’uan, presenting it as a martial art, a medicine, and a form of exercise and self-development. With examples from anatomy and physics, he demonstrates precisely how the postures and movements of T’ai Chi work, both internally as energetic principles and externally on opponents. Contrasting Western and Chinese techniques of healing, he emphasizes that disease, like an attack from an opponent, is an opportunity for training. Professor Cheng explains how the practitioner may serve as his or her own doctor and, at the same time, act as the physician or trainer of an attacker. The martial arts, he says, are not a special case of unusual power, but are simply an aspect of adapting natural and cosmic law to circumstance.

This edition of the classic text contains thirteen major essays; oral secrets from Yang Chengfu; a Q&A with commentary on the T’ai Chi Classics; functions and applications of each of the thirty seven postures of the short forms; descriptions and mechanics of push-hands, San Shou, and Ta Lu; prefaces by Madame Cheng and Benjamin Pang Jeng Lo; and more.

Cheng Man Ch’ing published T’ai Chi, the Supreme Ultimate Exercise for Health, Sport and Self-Defense in 1967. He wrote over a dozen other books on many subjects, including medicine, the I Ching, the Tao Te Ching, and the Analects of Confucius, as well as poetry and essays, He died in 1975 at age 73. 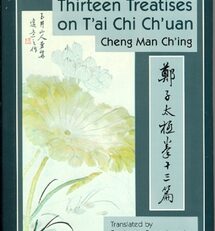