Grasping the Wind: An Exploration into the Meaning of Chinese Acupuncture Point Names

Point names, the traditional means for identifying acupoints, have meanings that are, like the wind, hard to grasp. Yet enfolded in these often poetic words is a utility that involves the complex associations derived from the evolution of the Chinese language and the vast array of therapeutic analogies found in traditional medical works.

In discussing the point names, the authors examine the meaning, context, and significance of each acupuncture point to promote understanding of the point’s use in acupuncture practice. Guidelines for understanding the nature and structure of the Chinese language are offered, along with discussions of the Chinese rationale for naming points and point groupings. The reasoning for selecting the English names is offered so that readers may adapt the names for their own use. Each of the 363 points covered is listed according to the system currently used in China. Descriptions include the name in Chinese characters, in Pinyin, and in English. The classical location according to major Chinese texts, the associated point groupings, an explanation of point functions, and classical energetic associations are also noted. Further detail is provided by inclusion of channel relationships, five-phase relationships, and qi functions. Additional notes detail linguistic and practical considerations that have accrued to the point over time. Alternate names for the point are given, again in Chinese, Pinyin, and English. Indexes provide stroke order listings, point group names, and point lists for each character. A glossary of all the characters used in point names provides a definition for each Chinese character. This book provides much valuable theoretical and therapeutic information.

Nigel Wiseman, a native of the UK, studied Spanish and German at the Heriott-Watt University in Edinburgh, subsequently working as a French-English translator in Belgium while learning Chinese. He holds a doctorate in Complementary Health Sciences from Exeter University, and is the author and translator of a prodigious body of work on Chinese medicine, including such outstanding classics as Practical Dictionary of Chinese Medicine, Fundamentals of Chinese Acupuncture, Fundamentals of Chinese Medicine, Shang Han Lun Yi Shi, Chinese Medical Chinese: Grammar and Vocabulary, and Introduction to the English Terminology of Chinese Medicine. A long-time resident of Taiwan, Dr. Wiseman is currently a lecturer of Chinese medical studies at Chang Gung Medical University in Taipei.

Andrew Ellis first studied Chinese medicine with Dr. James Tin Yau So at the New England School of Acupuncture. He left New England in 1983 to study Chinese language in Taiwan and apprenticed with Chinese herbalist Xu Fu-Su there for several years. Later he studied internal medicine and gynecology at the Xiamen Hospital of Chinese medicine. While there, he also specialized in the study of acupuncture with Dr. Shi Neng-Yun and dermatology with Dr. Zhang Guang-Cai.

Be the first to review “Grasping the Wind: An Exploration into the Meaning of Chinese Acupuncture Point Names” Cancel reply 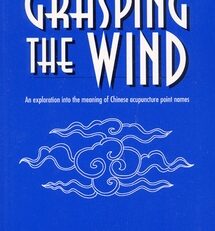 You're viewing: Grasping the Wind: An Exploration into the Meaning of Chinese Acupuncture Point Names $34.95
Add to cart