In thirty-seven original essays written for this book, some of the world’s leaders in healing explore their personal and professional experiences in order to uncover the underlying principles on which all healing rests. Rather than focusing on diverse techniques, the writers seek the “golden thread” that ties together the wide range of approaches to healing.

In simple, direct language, the contributors explore the complex nature of healing from many viewpoints. We hear from physicians, psychologists, nurses, metaphysical healers, and shamans.

The result is a grand synthesis of heartfelt thinking that offers a treasury of profound insights for people in the healing professions, people who seek to develop their own healing capacities, people who wish to benefit from healers, and anyone interested in the magical properties of human relationships.

Richard Carlson, Ph.D, was considered one of the foremost experts in happiness and stress reduction in the United States and around the world, and was a frequent guest on such shows as Oprah, The Today Show, The View, CNN, Fox, PBS, and over 2000 other shows. Don’t Sweat the Small Stuff continued to be a publishing phenomenon, with over 20 titles in the series, two of which were co-authored with his beloved wife, Kris. He died of a pulmonary embolism in December 2006, at the age of forty-five.

Be the first to review “Healers on Healing” Cancel reply 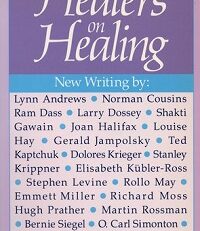