The Jīn Guì Yào Lǜe (“Essential Prescriptions of the Golden Cabinet”), like its sister volume the Shāng Hán Lùn (“On Cold Damage”), is a gem reconstituted from fragments of a lost text called the Shāng Hán Zá Bìng Lùn (“On Cold Damage and Miscellaneous Diseases”) by indisputably the most brilliant medical mind that China ever produced, the Hàn Dynasty physician Zhāng Jī (Zhāng Zhòng Jǐng). Exerting an influence on the development of Chinese medicine unmatched by any other medical scholar, Zhāng integrated the then relatively new theories of systematic correspondence of the Nèijīng and Nànjīng with an already vast practical knowledge in the use of medicinals. Such was his brilliance that it was not fully recognized by Chinese physicians until centuries later in the Sòng Dynasty, when Zhāng’s combination of theory and practice became the mainstream in Chinese medicine that survived centuries of scrutiny from successive generations of medical scholars and buttressed traditional medicine against the challenge of Western in the twentieth century. Combining theoretic etiologies with detailed diagnosis and skillfully devised treatments, Zhāng’s work has left an indelible print on traditional medicine in China for nearly 2,000 years. A third of the most commonly used formulas in Chinese medical practice today were devised by Zhāng Jī.

The Jīn Guì Yào Lǜe covers diseases other than the external contractions dealt with in the Shāng Hán Lùn, and includes lung diseases, water swelling, dissipation-thirst, impediment (bì), summerheat stroke, mounting diseases, and gynecological diseases, to name just a few. It is presented in 25 chapters, most of which deal with two or three closely related diseases; however the final three chapters cover miscellaneous formulas and foodstuffs. Each chapter includes an introduction to the material, followed by the original lines of the text, which are rendered in simplified Chinese characters, Pīnyīn, and English translation. This is followed by notes to elucidate obscure phrases in the original text, a synopsis of the content of the line, and detailed explanatory commentaries.

Textual History (from the Introduction by Sabine Wilms)

As its title suggests, Zhāng Zhòng-Jǐng’s Shāng Hán Lùn discusses the diagnosis and treatment of cold damage conditions, which are conditions related to external contraction, especially of wind and cold. His Jīn Guì Yào Lüè is thought to reflect that section of the original Shāng Hán Zá Bìng Lùn that was called “miscellaneous diseases” (杂病 zá bìng), basically a catch-all phrase for any conditions which could not be traced to externally contracted evils. The full title of this present text is Jīn Guì Yào Lüè Fāng Lùn, “Essential Prescriptions and Discussions from the Golden Cabinet.”This title tells us several things about the book. First, it is an indication of the value that the author (or more accurately, the person who named the text as such) placed on the book’s content. “Golden Cabinet” refers to a cabinet-like storage box made of gold, hence a place where a person of great wealth would store his or her most valuable items. Second, the text is characterized as containing both “prescriptions” and “discussions,” or in other words, clinical as well as theoretical information. This combination positions it at an interesting fulcrum in the textual history of Chinese medicine, namely the intersection between theoretical classics like the Huáng Dì Nèi Jīng (“Yellow Emperor’s Inner Canon”) and Nàn Jīng (“Classic of Difficult Issues”), which were mostly concerned with the flow of qì and blood through the vessels and the correlation of the human body to the macrocosm, and formulary collections like the Qiān Jīn Fāng (“Thousand Gold Pieces Prescriptions”) by Sūn Sī-Miǎo, which primarily matched lists of symptoms to specific formulas without providing any diagnostic or etiological explanation for the rationale behind a treatment. By contrast, the Jīn Guì Yào Lüèincludes detailed diagnostic guidelines and etiological reasoning in addition to instructions for treatment primarily with medicinal formulas (and some references to acupuncture, moxibustion, and other therapeutic modalities). Zhāng Zhòng-Jǐng thus created a medical classic with outstanding significance for both theory and practice, centuries before other medical authors attempted to follow in his footsteps during the Sòng period.

Due to the turbulence of its historical times, it is impossible to reconstruct the exact format, content, and organization of Zhāng Zhòng-Jǐng’s work today. Nevertheless, its significance for the history of medicine and its applicability in modern clinical practice has inspired much research, especially in China, to approximate its original form as much as possible on the basis of later reprints, fragments that have been recovered in China and Japan in archaeological sites, and quotations in received texts.

By order of the Sòng Imperial court in the 11th century, both the Shāng Hán Lùn and the Jīn Guì Yào Lüè were included among a small selection of early Chinese medical classics to be collated, annotated, and reissued in woodblock print. This monumental effort was completed by a large editorial team from the Office for the Correction of Medical Texts, which had been established in 1057 CE. While these scholars had access to the ten scrolls of the Shāng Hán Lùn which had been edited by Wáng Shū-Hé, the part on “miscellaneous diseases” had not survived. Instead, they painstakingly had to recreate the Jīn Guì Yào Lüè on the basis of quotations found in other medical classics like the Mài Jīng (“Pulse Canon”), Zhū Bìng Yuán Hòu Lùn (“Origin and Indicators of Disease”), and Qiān Jīn Fāng (“Thousand Gold Pieces Prescriptions”), as well as a summary of Zhāng Zhòng-Jǐng’s work in three scrolls entitled Jīn Guì Yù Hán Yào Luè Fāng (“Essential Prescriptions from the Golden Cabinet and Jade Sheath”). These Sòng editors matched the prescriptions with the descriptions of symptoms, arranged the text by disease categories into 25 chapters in three parts, and lastly added select outstanding prescriptions by other physicians of the times, all with the goal of making this text as clinically useful as possible. This Sòng revision has been the standard version of the text ever since, and also the version on which subsequent editions such as this one are based. It is thus important for the discerning reader to keep in mind that we are looking at a Hàn dynasty text that was lost for several centuries and reconstructed, rearranged, and supplemented by Sòng dynasty scholars approximately eight hundred years later.

“Wiseman and Wilms have exquisitely translated the Jīn Guì Yào Lüè. The English rendering is impeccable, precise, and consistent. The detailed commentaries are systematic and comprehensive. Throughout my forty-six years as a clinician I have studied Zhāng Jī’s writings and prescribed formulas from the Shāng Hán Lùn and Jīn Guì Yào Lüè. I hope that this remarkable work in its English translation will help you to draw upon the genius of Zhāng Jī and to understand and utilize the depth of his knowledge of Chinese medicine.” 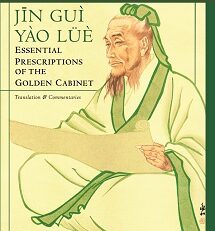