This immense tome begins with endorsements by the luminaries of Chinese medicine in the west, a 33 page Table of Contents that reveals the scope of the text, a Foreword by Julian Scott, a Preface by the author, Aknowlegements, a Note on the Translation of Chinese terms, a guide on How to use the book and an innovative Index of symptoms and signs.

The book is organized by Chapters within Sections, Sections within Parts. These begin with Parts explicating the four examinations: Diagnosis by Observation, Diagnosis by Interrogation, Diagnosis by Palpation, Diagnosis by Hearing and Smelling. These are followed by Part 5, which is divided into a section on Symptoms and Signs presented by parts of the body and a section on gynaecological symptoms and signs. Part 6 covers pattern identification in four sections: internal organs; qi, blood and fluids; pathogenic factors, four levels, six stages and three burners; eight principles, twelve channels, eight extraordinary vessels and five elements.

The text concludes with Appendices on Case Histories, Prescriptions, and the History of Diagnosis in Chinese Medicine, a Glossary of Chinese Terms, a Bibliography, Chinese Chronology and Index.

The book is in a compact, modern textbook format that presents a lot of information in a highly accessible manner. The chapters contain not only prose discussions but summary tables, case histories, illustrations. flow charts, term comparisons, and clinical notes. The design is highly innovative to make the book easier to access through type and color differentiations as well as icons and cross references. The use of a second color within the text and the color plates found at the back of text where they can be easily access while reading add a further dimension of convenience and practical comprehension.

This work is an easily accessed and highly illustrated guide to diagnosis in Chinese Medicine. Emphasis is placed on issues and symptoms commonly encountered in clinical practice, and the text focuses on interpreting these signs and symptoms. It is the author’s thesis that since Chinese medicine diagnosis relies on a subjective appraisal of the patient.s symptoms and signs – which form a pattern . many factors beyond traditional Western symptoms must be taken into consideration. A subtle appraisal of a patient’s disharmony, and a careful interpretation of a range of nuances, will lead the student or practitioner to a successful diagnostic interpretation.

Following is a top-level description of the text content.

Chapters within Diagnosis by Observation include:

Chapters within Diagnosis by Interrogation include:

Diagnosis by Palapation includes chapters on:

Diagnosis by Hearing and Smelling includes:

Symptoms and Signs includes a section on general symptoms and signs containing chapters on:

Symptoms and Signs includes a section on gynecological symptoms and signs containing chapters on:

The first section of Part 6 covers Identification of Patterns according to the Internal Organs with chapters for each of the internal organs.

The second section of Part 6 covers Identification of Patterns according to qi, blood, yin and yang.

The third section of Part 6 covers Identification of Patterns according to pathogenic factors, four levels, six stages and three burners. It is presented as the following chapters:

Be the first to review “Diagnosis in Chinese Medicine” Cancel reply 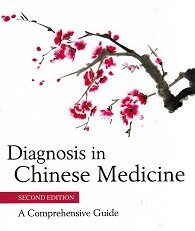 You're viewing: Diagnosis in Chinese Medicine $169.00
Add to cart