The Pulse Classic: A Translation of the Mai Jing

The Mai Jing or Pulse Classic was written in the late Han dynasty by Wang Shu-he. It is the first book in the medical literature devoted entirely to pulse diagnosis, and as such is considered a foundation text for anyone interested in understanding the rationale for and methods of reading the pulse in Chinese medicine. Although complex, this book is a mine of valuable information for those wishing to delve more deeply into the study of the pulse.

Wang Shu-he lived during the first half of the first millennium. Besides compiling the Mai Jing, he also edited Zhang Zhong-jing’s monumentally important Shang Han Lun/Jin Gui Yao Lue (Treatise on Damage [Due to] Cold/Essentials of the Golden Cabinet). In fact, it was Wang who divided Zhang’s single work into these two separate books.

“We have wanted to publish a translation of the Mai Jing for years. We always thought it would be beyond us. When Yang Shou-zhong suggested this as his next translation project, we jumped for joy. Every serious student of Chinese pulse diagnosis needs to have read this seminal classic at least once.”

“Wang Shu-he’s Pulse Classic influenced many neighboring and distant countries, being introduced to Korea and Japan in the 6th century. In the 11th century, it arrived in Arabian lands and greatly promoted medical science in the Middle East. The medical sage of Arabia, Avicenna, included the 24 pulse images in Chapter Two of his great work, An Encyclopedia of Medicine. Ancient Indian medical records first describing pulse-reading techniques in the 13th century were also a transmission from China. In 1313, Wang’s masterpiece was translated into the Turkish language. This ably demonstrates Wang’s great contribution to world medicine.”

Be the first to review “The Pulse Classic: A Translation of the Mai Jing” Cancel reply 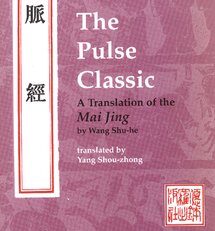 You're viewing: The Pulse Classic: A Translation of the Mai Jing $49.95
Add to cart