Treatment of Disease in TCM: Volume 2, Diseases of the Eyes, Ears, Nose & Throat

This is the second volume in the seven volume series titled The Treatment of Disease in TCM authored by Philippe Sionneau and Lu Gang. In this volume, Sionneau and Lu discuss the TCM disease causes and mechanisms, pattern discrimination, treatment principles, formulas and their modifications, and acupuncture and moxibustion for a wide variety of Diseases of the Eyes, Ears, Nose & Throat. Not only are many of the problems (such as itchy eyes, itchy ears, chalazion, otopyorrhea, and bleeding from the ears) not discussed in the current English language TCM literature, but under each disease category, the authors give the most complete pattern discrimination available in English, including not only the most obvious textbook patterns but also lesser known patterns which real-life patients nonetheless manifest. Thus this series of books is a rich mine of clinical information and effective treatments for a wide variety of diseases and their patterns.

Philippe Sionneau is a specialist in Chinese materia medica and internal medicine. He received his Bachelor’s Degree in TCM at the Hubei College of TCM in December, 1994. M. Sionneau teaches at several TCM schools in France and has authored a number of books on various aspects of Chinese medicine, including acupuncture, materia medica, internal medicine, and TCM psychology. Currently, M. Sionneau practices TCM in Paris, France.

Be the first to review “Treatment of Disease in TCM: Volume 2, Diseases of the Eyes, Ears, Nose & Throat” Cancel reply 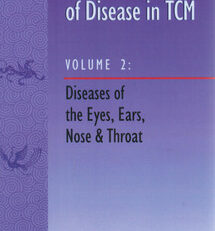 You're viewing: Treatment of Disease in TCM: Volume 2, Diseases of the Eyes, Ears, Nose & Throat $24.95
Add to cart