This clinical manual describes the treatment of 185 diseases and 18 common symptoms with Chinese herbal medicine and acupuncture. These diseases span such specialist areas as internal medicine, surgery gynecology, pediatrics, dermatology and otorhinolaryngology. The etiology and pathogenisis of disease are discussed briefly, but the main emphasis is on key points in diagnosis, differentiation of syndromes, and treatment, particularly with herbal medicine. The treatment of each disease is discussed in five parts:

With its comprehensive coverage of over 200 diseases and common symptoms providing solutions to most clinical problems, this book will be useful to all acupuncture practitioners and latter-year students (including physiotherapists and medically qualified acupuncturists), as well as Western and Chinese herbal medicine practitioners.

Professor Zhou Zhong Ying. Professor Zhou was born in 1928. His father began teaching him Traditional Chinese Medicine in 1941, and he received further training at Shanghai Medical College in 1947 and Nanjing University of Traditional Chinese Medicine in 1955. In the period between 1956 and 1983 he worked in the department of Internal Medicine at the Affiliated Hospital of Nanjing University of TCM as a doctor, chief physician and professor. From 1983 to 1991 he was president of Nanjing University of TCM. Professor Zhou is one of China’s foremost TCM doctors. In his first 46 years of clinical work, he has gained extensive experience in the practice of TCM, especially in the treatment of acute and intractable diseases, and he is particularly interested in the relationship between Qi and Blood, and Phlegm and stagnant Blood. He has written 22 books on TCM, some of which are used by undergraduate students in colleges of TCM all over China. These include Traditional Chinese Internal Medicine, and General Description of Traditional Chinese Medicine. He has also written and published over 80 articles in TCM journals for a wide range of readership.

Professor Jin Hui De. Professor Jin was born in 1943 into a family with a long-standing tradition of practising Chinese medicine – his mother, grandfather and great grandfather were all practitioners of Chinese herbal medicine. He studied English for four years before he began teaching in Nanjing University of TCM where he later gained a diploma in TCM. Since 1979 he has been working in the International Acupuncture Training Centre of Nanjing University of TCM as a TCM doctor, translator and interpreter. He has extensive knowledge of TCM, both theoretically and clinically, from his education at Nanjing University of TCM and through his own practice. He has compiled and translated a number of TCM books, for example, Acupuncture Treatment of Common Diseases Based on Differentiation of Syndromes, Concise Traditional Chinese Gynecology, Essential of Traditional Chinese Pediatrics and A Clinical Guide to Chinese Herbs and Formulae. In 1993 and 1994 he practised TCM in Denmark, and since April 1995 he has been practising Chinese herbal medicine, acupuncture and Chinese massage in London. He lectures widely at TCM colleges in the UK and Ireland.

Praise for Clinical Manual of Chinese Herbal Medicine and Acupuncture 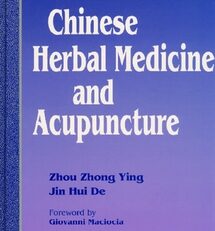 You're viewing: Clinical Manual of Chinese Herbal Medicine and Acupuncture $176.00
Add to cart