Each of the traditional 7 chakras contain 21 microchakras, which enable the chakras to process information related to our thoughts, feelings and behavior. When the energy flowing in the chakras is blocked, our physical, emotional, and psychological well-being is compromised. Through the unique practice of InnerTuning – a system of precise, potent sounds and mantras – blockages in the microchakras can be released so the subtle body can become realigned and physical and mental health can be restored.

Sri Shyamji Bhatnagar developed the InnerTuning technique from his early work with breath and sacred sounds, which began at age 12 with his guru in India. In 1967 his discovery of the 147 microchakras inspired his creation of Microchakra Psychology, a blend of ancient wisdom and contemporary psychology that explains the working of the subtle body and how opening or blockages in the chakras can either encourage or sabotage psychological health and spiritual development. Child-rearing practices, particularly in the first three years of a child’s life, directly affect the relative openness of the chakras and consequently the developing personality of the child. For example, a child with an open third chakra will feel confident and relate easily with others while third-chakra blockages may result in aggressiveness and an overly competitive attitude. In Microchakras, the authors detail indications of openings and blocks in each of the 147 microchakras along with examples of the actions that would tend to create blocks or foster openness.

For centuries the subjective viewpoints of metaphysics and religion have been rigorously excluded from the scientific study of the nature of being. Discoveries in quantum physics have awakened a newfound interest in consciousness, which has moved to the forefront of experimental science. Microchakrs Psychology and InnerTuning represent major contributors in consciousness research and practical healing techniques. In this book, Shyamji describes methods for optimizing energy flow in the microchakras to enhance well-being and promote spiritual growth through the power of sound, breath, and the divine energy that resides within us all.

A 28-minute CD of sacred sounds – the Shree Radhay mantra – is included to facilitate the InnerTuning process.

Sri Shyamji Bhatnagar, born and raised in India, is a master of naada (sacred saound) and the founder of InnerTuning and Microchakra Psychology. He is renowned for the profound healing effects of his chanting, and he teaches throughout the world. He lives in Pennsylvania.

David Isaacs Ph. D., a student of Shymaji since 1979, was a professor of psychology for 29 years at the University of Bridgeport in Connecticut. He lives in New Jersey.

“More than 40 years ago Shyamji Bhatnagar, a then unknown meditation master, brought the concept of ‘chakra psychology’ to the West. Since that time, more than any other person, he has expanded on the understanding that the energies of our bodies are either in balance or out of balance. I have personally met more than 100 people who have overcome deep depressions and hyperanxiety and uplifted their spirits all through Shyamji’s teachings. Microchakras rises above all the faux material on chakras and is the definitive work for those wishing to use InnerTuning to bring balance back into their body. I cannot recommend it highly enough.”

“A remarkable book that could not be more timely. The exercises the authors prescribe for InnerTuning are based on the paradigm that the basic stuff of the universe is sound; readers are taught how to use their reason, feelings, and intuition to attune themselves with this sound. Microchakras will arouse controversy, transform lives, and may help to heal the torn cultures of our era. Its goal is nothing less than spritual transformation, not only of the reader but also pf a species that has become increasingly endangered.”

Be the first to review “Microchakras: InnerTuning for Psychological Well-being” Cancel reply 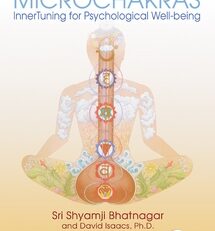 You're viewing: Microchakras: InnerTuning for Psychological Well-being $24.95
Add to cart