This text is a literal translation of one of the earliest and most important classics of Chinese medicine and natural science: the Shén Nóng Běncǎo Jīng 神農本草經 or “Divine Farmer’s Classic of Materia Medica.” Compiled in the third century CE but undoubtedly much older in content, it contains information on 365 substances that were considered to have beneficial effects on the human body.Aimed primarily at modern students and practitioners of Chinese medicine, this work is also for academic researchers and hobby students of medical history, Chinese classical literature, and natural science.

The translator’s work reflects a triple engagement with the worlds of applied Chinese medicine, academic sinology, and sustainable agriculture. The 365 substances covered are categorized in three books, associated with Heaven, Humanity, and Earth respectively. Coming from the perspective of alchemy and the pursuit of health and longevity, treating disease and expelling pathogens by ingesting substances that have a strong directly-discernible effect on the body is viewed as the lowest goal. By contrast, the higher-ranked medicinals often have no discernible effect when ingested, but especially when taken over long periods of time have such ambitious and intangible goals as connecting the human spirit to heaven, lightening the body, or staving off aging. The information contained in this book and the vision of the world and of the effect of natural substances on the human body expressed here are bound to inspire any practitioner of the Chinese art of yǎngshēng 養生 (“nurturing life”).

Features of this text: 54 pages of prefatory matter. 423 pages of text in both classical Chinese and contemporary English, consisting of Three Books with a total of 365 entries. A handsome user-friendly 4×7 format to allow you to carry this little book with you wherever you go and easily look up individual medicinals. A critical edition of the Chinese source text, based on the leading current Chinese editions and incorporating philological, etymological, and archaeological findings. A literal yet elegant translation into English, crafted with careful attention to different possibilities inherent in the classical Chinese but also to readability, to reflect the elegance of the original. A crisp clear layout, featuring the Chinese text immediately above the English translation in a structure that makes cross-referencing easy even for a beginning student of medical Chinese. 15 illustrations (3 linoleum prints and 12 sketches by Maria Hicks) of medicinal substances 36 pages of endnotes that discuss such diverse topics as medicinal identification, grammar questions, and character variations, based on extensive research in historical and contemporary commentaries. A useful clinical GLOSSARY that contains explanations of ancient disease names on the basis of classical medical texts, most notably Sūn Sīmiǎo’s 孫思邈 Bèi Jí Qiān Jīn Yào Fāng 備急千金要方 and Cháo Yuánfāng’s 巢元方 Zhū Bìng Yuán Hòu Lùn 諸病源候論. References to modern TCM, for example in regards to the usage of medicinals and disease names. In addition to the GLOSSARY, a BIBLIOGRAPHY with both historical sources and contemporary references, herb indices by Pinyin, Latin, and English common name, and a general index. 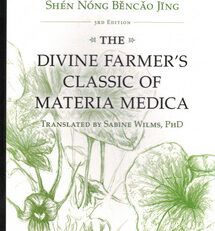