The Complete Book of Five Rings

The Complete Book of Five Rings is an authoritative version of Musashi’s classic The Book of Five Rings, translated and annotated by a modern martial arts master, Kenji Tokitsu has spent most of his life researching the legendary samurai swordsman and his works, and in this book he illuminates the seminal text, along with several other works by Musashi. These include “The Mirror of the Way of Strategy,” which Musashi wrote when he was in his twenties, “Thirty-five Instructions on Strategy,” and “Forty-two Instructions on Strategy,” which where precursor’s to The Book of Five Rings; and “The Way to be Followed Alone,” which Musashi wrote just days before his death. Read together, these five texts give readers an unusually detailed, nuanced view of Musashi’s ideas on swordsmanship, strategy, and self-cultivation.

Tokitsu puts these writings into historical and philosophical context and makes them accessible and relevant to today’s readers and martial arts students. Tokitsu understands Musashi’s writings – and Musashi as a martial artist – unusually well and is able to provide a rare insight into the man and his historical contribution.

Miyamoto Musashi, who lived in Japan in the 1600s, was an undefeated dueler, a masterless samurai, and an independent teacher. He spent the last decades of his life refining and teaching his military science.

Kenji Tokitsu was born in Japan and began studying martial arts when he was a child. He has taught karate in Paris since 1971. In 1984 he founded the Shaolin-mon school, where he teaches a synthesis of the original combat arts of Japan and China. In 2001 he established the Tokitsu-ryu Academy (www.tokitsu.com) to teach and promote his method. Tokitsu also holds doctorates in sociology and in Japanese language and civilization. He is the author of Ki and the Way of Martial Arts. 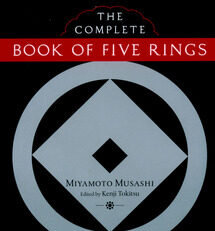 You're viewing: The Complete Book of Five Rings $17.95
Add to cart